Kumihimo tutorials for making round braids on a braiding disk

Buy packs of thick silk floss in your choice of colors and a key ring you'll need just below to make the ridged key ring. 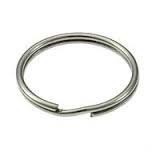 A Ridged Spiral Braid for a key ring

Please arrange threads in 2 colors as shown. The 4 white threads should be twice as long as the 8 blue ones.

A key ring directly under the center hole has the threads passing through it and then to the slots around the disk. The braiding weight is attached to the ring.

Please keep the two pairs of blue threads relatively close together. This braid is based on the kongo but with an exciting difference in appearance. The initial move is to take the white thread at the upper right and move it down to the right of the three white threads opposite below. >
Here is the finished braid.

Click on title below to see the next page: